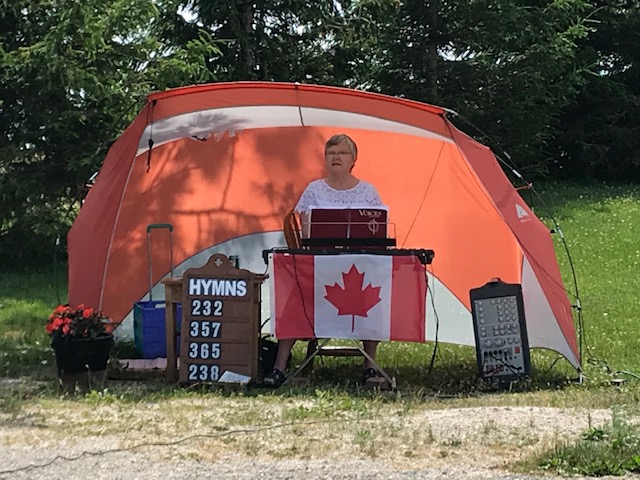 It was a new feeling to sit on lawn chairs in front, or behind or on the side of our Church – depending on where we could shelter from the wind. We could look at the Church from the outside and marvel at the limestone blocks placed there by our forefathers who built the stone and brick Church in 1887. As one gazed up the bright orange bricks stacked on top of the light grey limestone blocks, the view led to a steel roof installed there through the fundraising and efforts of Church folk from previous years. And beyond the roof, bright blue summer sky.

The congregation members were each given their own dedicated copy of Voices United. It was a new chance for all of us to leaf through this book where hymns were assembled by the United Church. The red Voices United books were placed in the back of the wooden pews of our Church, next to the Bible and seemed part of the Church’s furniture. We used them every Sunday when invited to turn to the page of the hymn we were about to sing. We rarely leafed through the book ourselves. But during the Outdoor Hymn Sing, we were invited to look through Voices United and pick out the hymns that we wanted our pianist Muriel Lush to play. That was quite a treat. Muriel played hymns by request! It was awesome!

And we had the opportunity to marvel at the richness of the Voices United produced by Hymn and Worship Resource Committee of the United Church, edited by John Ambrose and published in 1996. We also realized that there were so many hymns that we didn’t know and got to sing some of the lesser known ones.

Our children had the opportunity to run around the beautiful lawn that surrounds the Church, carry the lawn chairs, sunbrellas, speakers, amplifier, microphones, and test all the equipment while we were setting up. Muriel’s notes would sometimes fly in the wind or fall over onto her keyboard, changing the instrument setting, so the sound of the piano would be replaced with that of some exotic instrument. Sometimes we just kept singing, and other times we’d ask her to change the instrument. Then she’d fumble pressing buttons and add some beats, making us laugh. Sometimes the children would walk up to try to assist – which was priceless.

Muriel would spend much of her week praying and seeking out devotional passages to share with the congregation on the weekend. She would select passages of scripture, stories, anecdotes. Dutifully she’d read or tell them to us despite her chronic bronchitis and occasional difficulty breathing. God Bless you Muriel!